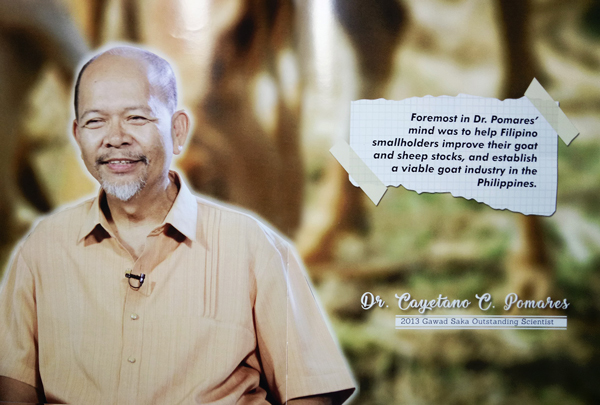 To honor and pay tribute to the outstanding performers in agriculture and fisheries and to serve as an inspiration and model for others are the two main objectives of the Gawad Saka Awards by the Department of Agriculture. This year, DA-Bureau of Agricultural Research launched a book entitled: “Research for the People” featuring five stories of Gawad Saka awardees.

Among the five featured winners is USM’s very own Vice President for Research, Development, and Extension Dr. Cayetano Pomares who was named Gawad Saka Outstanding Scientist in 2013. One chapter in the book highlighted Dr. Pomares’ career and contributions in the field of agriculture.

The 13-page feature of Dr. Pomares was divided into three subchapters: 1) For love of country, community, 2) Crocodile Dundee of the Philippines, and 3) Multi-awarded.

Dr. Pomares could have easily accepted the offers to work abroad for greener pasture, but he chose to serve downtrodden communities in the Philippines. “Foremost in Dr. Pomares’ mind was to help Filipino smallholders improve their goat and sheep stocks, and establish a viable goat industry in the Philippines”, says one quote in the book. His passion for research stemmed from his desire to breakdown the learnings into a language that farmers would understand. His stint in Melbourne University made him develop an AI technology that had a success rate of 80% and coin the term “seminology” or the study of semen.

In 2007, Dr. Pomares became involved in conserving freshwater crocodiles of the Liguasan Marsh where he got the moniker “Crocodile Dundee of the Philippines”.

In 2013, DA-BAR named Dr. Pomares as Gawad Saka Outstanding Scientist for being “a scientist, researcher, professor, and extentionist of USM well recognized for his pioneering work in Animal Science for a sustainable livestock production, introduced artificial insemination in goats and sheep, developed the technology of liquid storage in semen, initiated the establishment of the Small Ruminant Artificial Insemination Center undertaken through the biotechnology approach in artificial breeding, crusader for the peace process in and around the Liguasan Marsh, institutionalizing biodiversity, conservation, and climate change mitigation”.

This recent feature about Dr. Pomares solidifies his position and contribution in the field of agriculture in the country. USM being his home is truly proud and indebted to all his contributions which bettered the lives of the farmers and researchers. Truly enough, USM has some of the top-caliber researchers in the country.