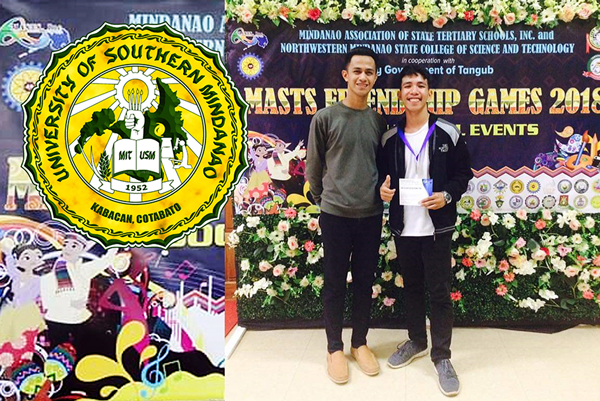 Labuyo, Tangub City – University of Southern Mindanao (USM) participants to the Mindanao Association of State and Tertiary Schools (MASTS) Friendly Games 2018 were among the best in Mindanao after bagging several wins in this year’s socio-cultural competitions held on October 26-29, 2018 at Northwestern Mindanao State College of Science and Technology, Labuyo,Tangub City.

MASTS is an annual literary, socio-cultural competitions aimed at celebrating and honing students’ skills and talents across the country. With only 33 participants, USM was among the smallest delegations this year. However, out of the 21 participating colleges and universities, USM managed to clinch the Top 6 spot with just 5 points away from the Fifth Place.

Bringing the gold back to USM in Essay Writing was Orville Flores after he was declared champion with his coach Mr. Jallal Malaguia (see photo). Flores is a 5th Year Doctor of Veterinary Medicine student while Mr. Malaguia is an English faculty from the Senior High School.

The winners would represent USM and the region in the national Philippine Association of State University and College (PASUC) competitions to be held on November 27, 2018 in Davao City.