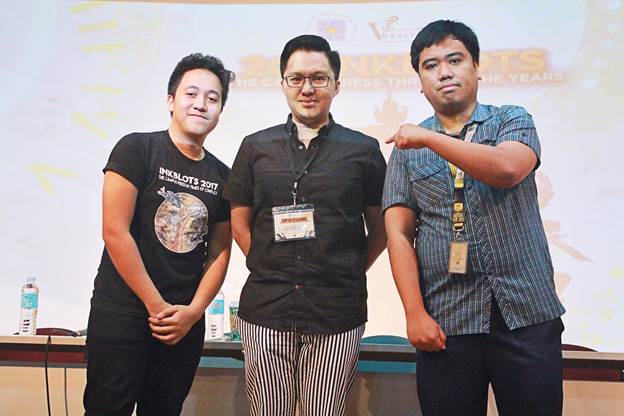 Inkblots this year saw a gathering of almost 200 journalism fellows from all over the country. The Mindanao Tech, the official student publication of USM, was represented in the fellowship by the Editor in Chief DM Adil, Managing Editor Kenneth Paligutan, and their Adviser Mr. Colita.

Respected journalists from different fields and expertise served as the speakers in different sessions. Among whom were Mr. Manny Mogato, the Filipino who won a Pulitzer Prize for his reporting on the War on Drugs; Manix Abrera, the creator of Kikomachine Komiks; Alexis Romero of The Philippine Star; Teodoro Fernandez; Tony Hirro; Jose Maria Carlos of CNN Philippines; Joaquin Henson of Philippine Star and PBA; Aaron Favila of the Associated Press Manila; John Nery of the Philippine Daily Inquirer; and Nestor Cuartero of UST.

One of the most anticipated parts was the news writing contest where all the fellows were tasked to write a news article about the speech of the keynote speaker Manny Mogato. The contest was judged by Alexis Romero who also declared the winner.

Colita, who has been the adviser of The Mindanao Tech for three years now, bagged the top prize for his news article. “My win came as a surprise because I almost ran out of time writing the end part of my article, so I just needed to write whatever I thought would complete my work,” he said.

When asked for a message, he added: “I hope this win would inspire my students and my writers in the Mindanao Tech to continue honing their skills and improving their craft. After all, USM has some of the best writers in the province.”