40 Years and Growing: From MIT Clinic to USM Hospital 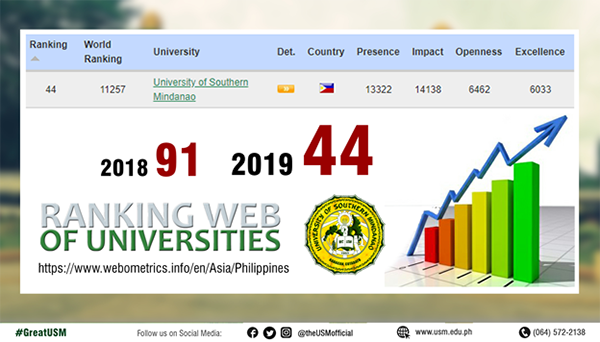 University of Southern Mindanao ranked 44 among 267 Higher Education Institutions in the country and 11,257 among 25,000 universities worldwide. This report is based on the January 2019 edition of Webometrics ranking of worldwide universities.

USM advanced 47 places on the list compared to the 2018 data where it ranked 91. The ranking is based on web presence, impact, openness, and excellence as reported by the Spanish National Research Council’s Webometrics, a ranking system that evaluates the performance of websites of more than 22,000 universities in the world.

According to Webometrics, the ranking is “based on a composite indicator that assesses a website’s visibility and activity. Visibility is evaluated through a count of the external links that a university web domain receives from third parties. These data indicate the university’s “conventional prestige, academic performance, the value of information, and usefulness of services.”

USM President Dr. Francisco Gil N. Garcia saw this good news as an affirmation of the efforts of the University in improving the quality of education and service it provides to its clientele. In Region 12, only USM was included in the top 50 universities among its SOCCSKSARGEN counterparts.

Aside from providing maximum amount of information about USM activities and services on its website, the publication of scientific research by the faculty and staff is seen to be one reason to raise the university’s ranking.