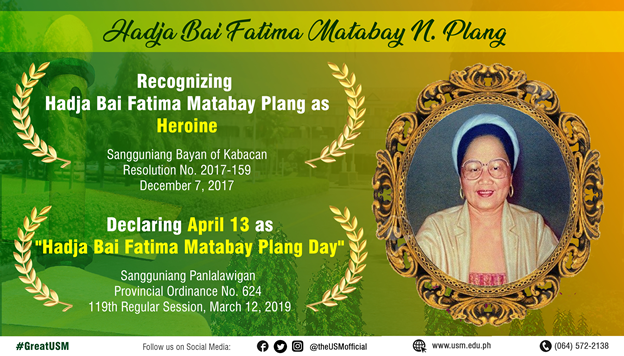 The Provincial Government of North Cotabato recognized the USM founder for her great contributions especially in education. Through the Sangguniang Panlalawigan Provincial Ordinance No. 624, April 13 of every year has been declared as “HBFMNP Day” during its 119th Regular Session held on March 12, 2019.

Recognizing Hadja Bai Fatima Matabay Namli Plang as Champion for Education, Advocate for the Integration of the Tri-People and Just Peace, Model for Compassion to the Needy and Poor Families, Respect and Preservation of Cultures, and an Epitome of Women Empowerment; and Declaring April 13 of Every Year as “Hadja Bai Fatima Matabay Namli Plang Day”.

Meanwhile, LGU-Kabacan recognized Bai Matabay as a Heroine through SB Resolution No. 2017-159 on December 7, 2017. Last year, March 27, 2018, a Plaque of Recognition was awarded to her by the LGU-Kabacan in partnership with the Local Council of Women.

The Sangguniang Bayan of Kabacan on its 58th Regular Session held on December 7, 2017, had passed and approved the Resolution No. 2017-159: Resolution Recognizing Hadja Bai Fatima Matabay N. Plang, a Maguindanaoan Lady Educator, as a Heroine for her Great Contributions especially in Education.

In acknowledgement to the great contributions of Hadja Bai Fatima Matabay N. Plang, a plaque of recognition has been awarded to her, which was received by her great great grand daughter on March 27, 2018, during the culmination program of the municipal-wide women’s month celebration, spearheaded by the LGU Kabacan in partnership with the Local Council of Women.