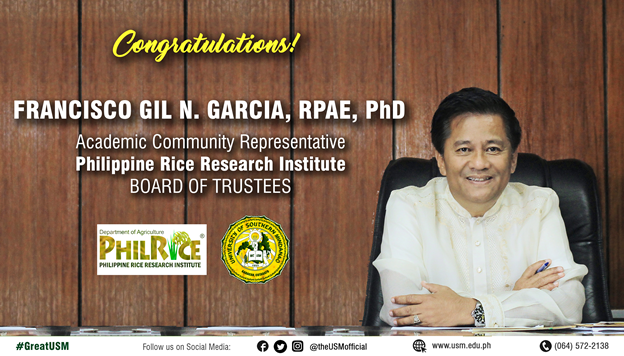 Dr. Garcia obtained his BS in Agricultural Engineering in 1987, MS in Professional Studies major in Rural Economics in 1997 both from USM, and his PhD in Agricultural Economics in 2004 at University of the Philippines Los Baňos. After he was elected as President of USM in 2014, he introduced innovations and reforms making USM as one of the best state universities in the Philippines. Dr. Garcia was sworn into office by President Rodrigo R. Duterte in Malacaňang last year.

PhilRice is a government corporate entity attached to the Department of Agriculture created through Executive Order 1061 on November 5, 1985 (as amended) to help develop high-yielding and cost-reducing technologies so farmers can produce enough rice for all Filipinos.