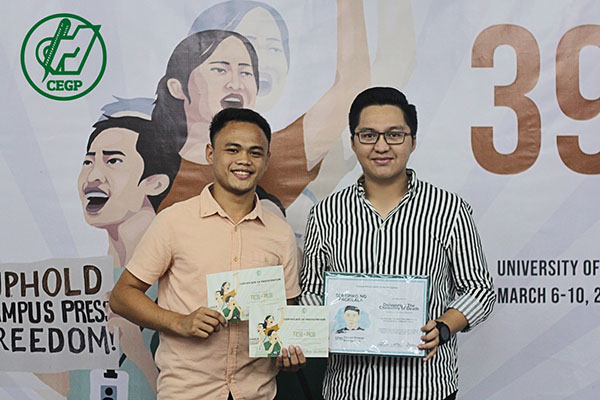 The Mindanao Tech (MinTech), the official student publication of the University of Southern Mindanao, reaped recognition anew from the College Editors Guild of the Philippines (CEGP), the oldest and only-existing alliance of tertiary student publications in the Asia-Pacific.

Daluyong, the literary folio of Mindanao Tech, entitled “The Chemistry of Death” was named as the 18th Gawad Ernesto Rodriguez, Jr 3rd Best Literary Folio during the 77th National Student Press Convention held on March 6-10, 2019 at the University of the Philippines-Cebu. The 18th GERJ is presented to outstanding quality publications with focus on technical excellence and content.

“The Chemistry of Death” was the maiden issue of MinTech’s official literary folio which was launched last year. It is a detective type novella about a fictional chemical tragedy set in campus. In an interview with Daluyong’s lead writer Marc Lorenz Bernalte, he said: “ the novella was our bold attempt to offer something new to USM students through a suspense-filled story”.

On September 14, 2018, “The Chemistry of Death” was also awarded by School Press Advisers Movement, Inc in Pampanga City as the 8th Most Creative Literary Folio Concept, 9th Outstanding Variety of Literary Works, and 10th Campus Literary Folio of the Year.

In 2016, MinTech was also recognized by CEGP as the 3rd Best Magazine in an awarding held in West Visayas State University. This recent win is MinTech’s first award for 2019 and 49th national award since 2015 proving that Mindanao Tech is the most active and most awarded student publication in the region.